Your best online source about Jacob Elordi
Welcome to Jacob Elordi Web , the newest online fansite dedicated to the talented actor, Jacob Elordi . You will be able to find the latest news, information, and photos to keep you up-to-date! Our gallery contains over 4,000 photos and growing. You'll know Jacob for his roles on Euphoria, The Kissing Booth ... The aim of this fansite is to serve as a respectful online resource for news and photos of Jacob Elordi. Please, feel free to visit us daily for more updates, and don't forget to visit our gallery.Thank you for visit the site, and come back soon!

HBO Sets Airdate For Special ‘Euphoria’ Episode, Says Another One Is Coming

No comments
by Abel

HBO said Monday that Euphoria will return for not one but two special episodes that are intended to bridge the gap between its successful Season 1 and Season 2, the latter of which has been delayed because of the coronavirus shutdown.

The network said the first of the two planned episodes of the series, for which star Zendaya won the Lead Actress in a Drama Series Emmy last month, will air Sunday, December 6 at 9 p.m. ET/PT. The second episode does not yet have an airdate.

The first bonus episode, titled “Trouble Don’t Last Always,” follows Rue (Zendaya) as she celebrates Christmas. It was written and directed by series creator Sam Levinson and also stars Colman Domingo, who appeared in Season 1. Both episodes were produced under COVID-19 guidelines.

Zendaya said on her social media accounts today that she and co-star Hunter Schafer are set to appear in both episodes. “We really missed them. Two special Euphoria episodes coming soon. First one December 6th on @hbo,” the actress said on Instagram. The accompanying photo was of Zendaya’s Rue reflected in Schafer’s eye. In the cryptic shot, Zendaya tagged Schafer, Euphoria creator Sam Levinson and DP Marcell Rev.

Photos: October 15 – Out for lunch in Malibu

Who is Jacob Elordi? 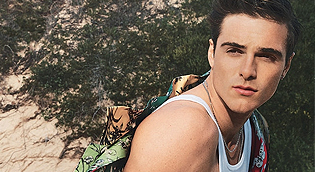 It's the summer before Elle Evans is set to head off to college, and she has a big decision to make.

For two couples the future unfolds in different decades and different places, but a hidden connection will bring them together in a way no one could have predicted.

A well-to-do husband who allows his wife to have affairs in order to avoid a divorce becomes a prime suspect in the disappearance of her lovers.

© 2020 Jacob Elordi Web / Theme by Sin21 & Gratrix / Back to top / Homepage
Jacob Elordi Web is an unofficial fansite run by fans and is in no way affiliated with Jacob Elordi, his management, or any representation there of. We take no ownership rights to any photos, media or information posted on the site. No copyright infringement is ever intended. If you feel any of the material rightfully belongs to you and want them removed, please contact us before taking any legal action. All original graphics and content belong to Jacob Elordi Web.